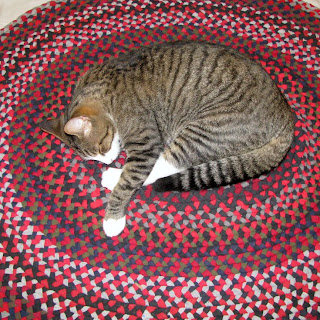 My hubby and three teenaged boys wear out a lot of t-shirts and jeans, and i can't bring myself to throw them away.  The jeans turn into car blanket sort of quilts, but the i never knew what was in store for the t-shirts until i realized a person could make braided rag rugs with them.  This is a quick step-by-step of my process, but please do additional web research in order to get additional options. 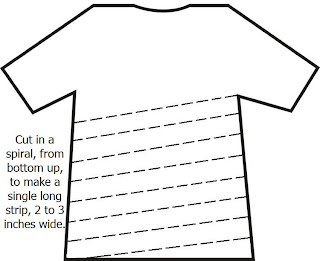 1.  I picked all of the red, grey, black and khaki green t-shirts out of my mountain of old cotton.  Using my sharp fabric scissors i cut off the bottom hem of the shirt (discard it), and then cut in a single, continuous, upwards spiral around the t-shirt, eyeballing a strip width of 2-2 1/2 inches.  Terminate your strip when you run into the armhole seam.

2.  If you pull gently lengthwise on each strip, the fabric edges tend to curl in on itself from the sides.  I put the ends of three long strips together, inner side of the fabric facing up (the edges thereby curl away from you and you don't see the raw edges), and pinned them to a heavy window curtain.  You use the natural curl to make the strips more rope-like, which makes them easy to braid neatly.  You may be able to think of something else to pin the braid to, but i found it comfortable to work standing, the braid pinned at about eye level, and then i could braid quickly for 3 feet or so, before unpinning and raising the braid up and re-pinning at about eye level again to continue braiding.  You want the braid to be fairly tight.

3.  To coil the rug, you want one super long length of braid.  When you come to the end of one t-shirt strip while you are braiding, you add another strip to it.  Here is a really handy method, which avoids the hard bump a knot would make: 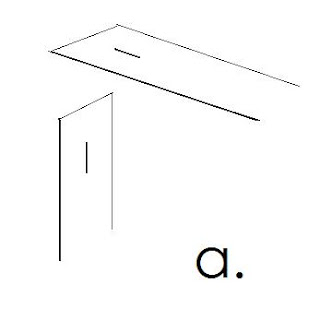 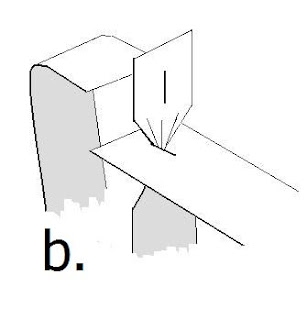 4.   Braid all the material you have into one very big pile. You can finish the ends off by taking several stitches, in place, through all three layers of material and making a knot.  This tacks the three ends together without making a bulky knob.

5.  Starting with one end of the long braid, begin coiling.  As you were braiding, you always try to keep the side of the braid facing you nice and neat.  So when you are coiling and stitching now, keep the "untidy" side of your braid facing "up".  I opted to make an oblong-shaped rug by keeping the first about 1 foot of the braid straight, and coiling the rest of the braid around it. 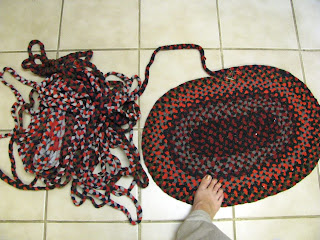 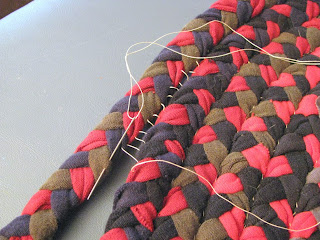 Stitch the adjacent braid together as you coil the braid.  In the photo you can see the relative placement of my ladder stitches, using heavy thread (quilting thread in this case).  I would take about 20 stitches and then pull the thread taught. 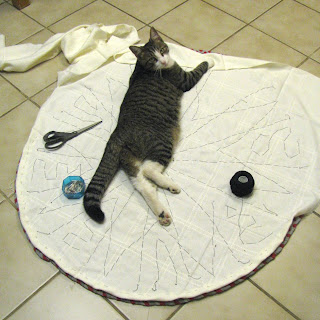 6.  I used a heavy cloth that i had on hand, as the backing.  I know most rag rugs don't need a backing, but my rug seems a little loose, and it can't be handled roughly without becoming deformed, so it needs the support of a backing.  In case the rug you make also ends up needing a little extra support, i include my directions for backing it here.  I basted (heavy black thread in the photo) the backing fabric to the rug, taking a small stitch completely through the braid, and a longer stitch on the back.  I found that on the front side of the rug, this small stitch usually disappeared into the many little crevasses of the braid and were almost unnoticeable from the front side.  (But it would be wise to more or less match your thread color to your rug color.)  The stitching pattern is unimportant, but i started by making a cross, then did a star pattern, and then filled in the big gaps with squiggles. 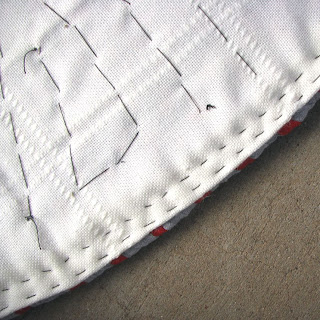 7.  I turned the edge of the backing fabric under in a double fold hem and stitched it down to the rug, securing it only to the back surface of the braids (not taking the stitch straight through to the front). 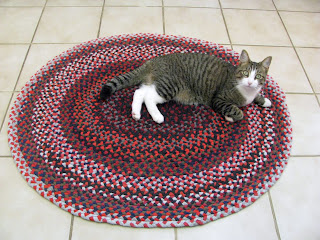 I didn't measure the length of the braid it took to make this 3 1/2 foot rug, but 22 old t-shirts are still being used daily, and have the appreciation of a happy kitty.

Posted by Lisa Reichert at 6:14 PM

Lisa Reichert
New Mexico
Hailing from the Canadian prairies and really enjoying life in sunny New Mexico, i make glass beads in the back of my garage. I have an entomology and art education, i have a husband and three sons, a parttime nanny gig, and a garden--all of my passions and passtimes show up in word and photo here in my blog. Thanks for stopping by!